I forgot to post this at the beginning of my trip, but I was having mechanical issues until the last minute and wasn't even sure I'd be able to go.

But it all worked out and I'm here now in Mesa, AZ with family at the end of Day 2.

I got a late start on Friday so I changed my route to LA from Hwy1 to I-5. Less scenic, more monotonous, quite a bit hotter, but it went smoothly and I had fun playing traffic leapfrog with the other cars amidst all the semis.

Today was more fun, mostly because I went through Joshua Tree. It was my only non-interstate segment of the day, and my first one of the trip, and it was gorgeous. Outside of Joshua Tree, back on I-10, it was overcast pretty much the entire way into Phoenix. The clouds looked stormy, but I only got a few sprinkles, so that just meant it was cloudy and cool and smelled like rain. I couldn't have asked for better desert weather.

And I'm not leaving my GPS on the entire way, for my phone's battery's sake, but I'm trying to check in with Firepin at every stop, so you can follow me at: http://tr.im/xUCu

I posted this to

motorcycles, but decided to get out of my echo chamber and spread the word to non-riders too:

I rarely rarely comment on random news sites, but I came across this one and made an exception:

Now, I’ve heard this argument before and I was doing my usual eye-rolling as I read the arguments - predictably, all drivers saying some variation on “they shouldn’t do that”.

But once they got to the supposed meat of the article, that lane splitting is the cause of a spike in motorcycle deaths, all they said was “The number of fatal accidents in California is slightly below the national average.”

Aside from the fact that lane sharing has been standard practice here for a long time, and therefore unrelated to any “spike”, doesn’t that mean lanesplitting ISN’T a cause here at all? If anything, maybe it helps?

Narggggghh. Damn media sensationalism. That’s when I decided to comment, especially after noticing there were only 6 other comments, all actually pretty reasonable, too.

This also helps prove my theory that any headline in the form of a question is complete bullshit and can be answered with “Um, no.” Because if the answer was yes, it wouldn’t be a question.

“As others have said, the safest place a bike can travel is between the lanes of cars. On my bike in regular traffic (not lane sharing), I have nearly been merged into COUNTLESS times. I have NEVER been merged into while lane sharing because cars are MUCH more likely to see a car beside them than a bike. Of course the danger is when the bike comes across a gap in traffic that a car tries to take advantage of as the bike approaches. But the smart biker learns these tricks.

There are safe ways to lane share and there are dangerous ways, as with anything.

And you'll notice the arguments against it are variations on "they shouldn't do that". Um, why? Because you're jealous you have to sit in traffic and we don't? Get over it. But really, I've seen more drivers move OUT of my way than anything. Which, to those of you who do so, I greatly appreciate it!”

I’ve been toying with the idea that lane sharing makes bikes more visible to cars in a general sense - drivers are more aware that motorcycles exist when they’re filtering right past them. I have no proof of this, but I will say I’m EXTRA cautious around cars during tourist season, especially cars with out-of-state plates.

And to those who say “but they scare the shit out of me when they go past!” - that’s because you’re not expecting it. Learn to expect it. Watch your mirrors (which you should be doing anyway), move out of the way when you can, and you won’t be so surprised next time.

Every so often I take a picture I'm really happy with.

This is one of those times. 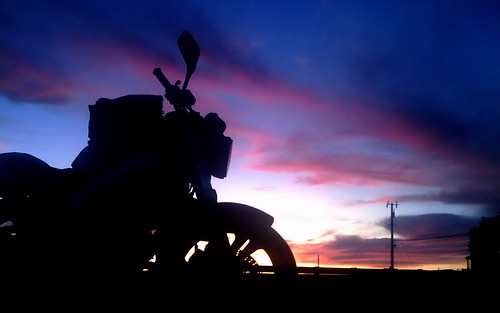 You just cant appreciate a full-sky sunset from a cage-- er, I mean, car.

I can add 2hrs and 100miles to my afternoon commute (normally 10minutes/10miles), which allows me three things: 1) I can ride one of my most favorite nearby roads (84) that's too traffic-y on the weekends to really enjoy. 2) I get to watch the sun set over the ocean from Hwy1 and 3) obviously, I forget about all the crap that happened during the workday.

I've also discovered a phone app called Firepin that allows friends to track me online in real-time via GPS. I tried it out yesterday, and now that I've figured out how it works, I'll probably be using it fairly often on rides (keep an eye on twitter for those), and definitely on my road trip in a few weeks (which I'll be sure to post here).

My route will be either this (#1) or this (#2). #1 will be cooler and quicker, but #2 is more scenic. Plus, I’ve been told I’ll be able to find gas every 100 miles along #1 (with a little advance planning), and I don’t know if that’s the case with #2. Green markers are overnight stops. C through H is pretty much set, as that’s where I have friends and family, but through UT, NV and CA, let me know if you have any suggestions for alternate routes.

I won’t bring my laptop with me, but I’ll be posting pictures and stories from my phone to here, as well as to twitter, so keep an eye out. ;)

Please do me a huge favor and visit The Deli SF and vote for The Dead Westerns for artist of the month. Voting ends at midnight tomorrow (EDT) and right now they're ~20 votes behind. I can't let them lose by such a small margin.

Full disclosure: a friend of mine is in the band, but they're actually really good - their myspace page is here.

I know many of you probably have (access to) more than one computer - hint hint. :)

I made my first eBay purchase last week and it finally arrived. A refurbished Garmin zumo 450. Amazon's price is $700, I got it for $400. I've been wanting one for a while, but was always hesitant to drop so much cash on it. But with the help of beatmyprice.com, I found this listing and took the plunge. Turns out it'll mount nicely to my clutch mount, so I just need to grab some longer bolts and figure out how I'm going to wire it to my battery.

Apologies for lack of posting lately. I'm on twitter constantly, though, so you can always find me there, @serafinak

I might start posting my riding routes here (found an amazing one a week or so ago - pics here & here) if I decide to give in to turning this a motorcycle-centric blog. ;)

I also revamped my website - much cleaner now. Yay!

I took my motorcycle to the racetrack on Easter Sunday. The weather was perfect.

Met and hung out with a bunch of cool people. 'Twas much fun passing bikes with 2-3x the hp on some of the turns. ;)

Instructors were super helpful, and the classroom sessions were quite informative. Rode 2-up with an ex-racer, which was probably the most terrifying experience of my life, and also one of the most fun.

I learned a few things about my general riding style that I'd kinda been aware of before, but were incredibly noticable on the track. Also, I really really need a garage instead of street parking. I need space to do things to my bike.... dirty, dirty things.

And HUGE thanks to

epim and Stan from BARF who helped me prep my bike and get it up there and back. :) 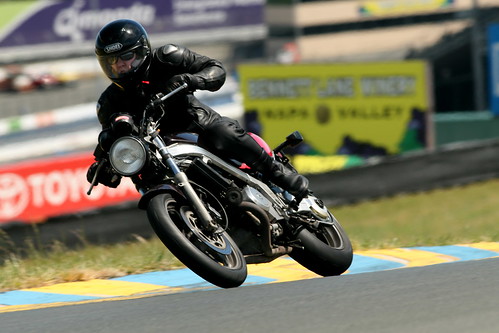 I rode down to San Luis Obispo and back this weekend. 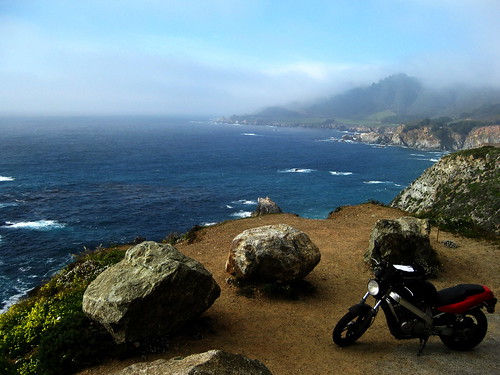 Anyone who doesn't "get" Twitter seems to focus on the egotism and boringness of the possible answers to the question "what are you doing?", which is how Twitter frames itself. And they're right. But the most interesting tweets on my stream dont answer that question. More often, they answer "what's on your mind right now?". Twitter is valuable for its ability to spread information to lots of people immediately. Any information. Memes, links, videos, news, spontaneous gatherings online and off, etc.

Regarding the issue of politicians twittering during Obama's speech, lots of journalists are framing it as if that makes them as bad as gossipy schoolkids. Twittering politicians is not a bad thing. The spontaneous, and succinct nature of tweets reveals a side of a person you do not get any other way. You get a certain honesty, or at least a feel for their personality on a day-to-day level (there are exceptions). You get the Republican who recommended people watch a basketball game if they didn't want to "watch Pelosi smirk for the next hour", and you get Claire McCaskill reporting on the new Health and Human Services secretary, saying she'll "be terrific", minutes after it's announced. These are their unfiltered opinions of an event as it happens. No filter, no delay. How is that a bad thing?

Twitter's not just useful politically. As I said, it spreads any information. Patrick Norton tweets one of my flickr photos and I get 7200 views in one day. Kevin Rose (and others) regularly brings down websites by sending thousands of followers to a page all at once. Veronica has an interview in twenty minutes, so she asks for interview question ideas and has plenty of material in no time.

The list goes on. It's ironic that twitter's usefulness can't be properly summed up in 140 characters. At least, I havent seen it. And twitter's not helping itself any, but that's another blog entry.

Sen. Claire McCaskill tweeted it best: "Those naysayers bout twitter don't get it. It's all about communication. Communication is always a good thing especially in my job."

There was a massive public pillow fight yesterday... 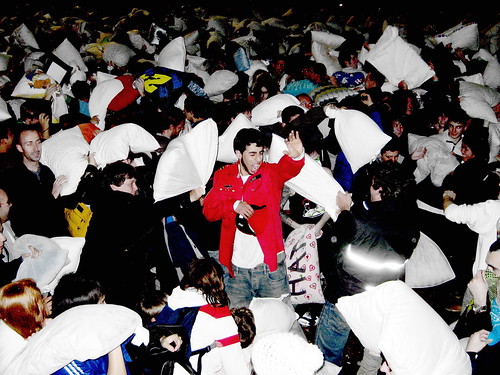